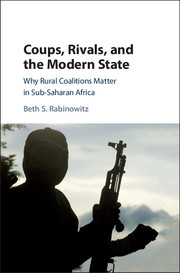 “State development in Africa is risky, even life-threatening. Heads of state must weigh the advantage of promoting political and economic development against the risk of fortifying dangerous political rivals. This book takes a novel approach to the study of neopatrimonial rule by placing security concerns at the center of state-building. Using quantitative evidence from 44 African countries and in-depth case studies of Ghana and Cote d’Ivoire, Rabinowitz demonstrates that the insecurities of the African state make strategically aligning with rural leaders critical to political success. Leaders who cultivate the goodwill of the countryside are better able to endure sporadic urban unrest, subdue political challengers, minimize ethnic and regional discord, and prevent a military uprising. Such regimes are more likely to build infrastructure needed for economic and political development. In so doing, Rabinowitz upends the long-held assumption that African leaders must cater to urban constituents to secure their rule.”

Find out more and read reviews for Coups, Rivals, and the Modern State at Cambridge University Press