This past summer, Dr. Shaheen Ayubi, lecturer for the Department of Political Science and a 2008 recipient of theSybil Cohen Award for Excellence in Teaching, presented the paper Violence and Women’s Human Rights Violations: The Case of Honor Killings, Wartime Sexual Violence against Women and Sex Trafficking in parts of Asia, Africa, and the Middle East to the Oxford Round Table Forum on Religion, Women, and History at Brasenose College at the University of Oxford.  Dr. Ayubi’s interest in honor killings, wartime rape, and sex trafficking grew after viewing the documentary Half the Sky, by Nicholas Kristof and Sheryl WuDunn of the New York Times, and through a course she was teaching, “Women and Politics in Developing Societies.”  “I was deeply troubled at the plight of abuses some women in non-western societies faced in the 21st century,” Dr. Ayubi says. 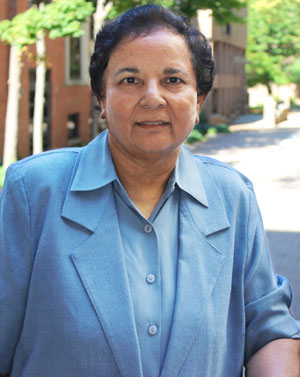 An advocate of undergraduate research who merges her research with the courses she teaches, when Dr. Ayubi began work on this paper last spring, she was eager to connect with an undergraduate student so that he or she could gain research experience.  Bradley A. Honsinger, an Honors Collegestudent majoring in political science who is a member of the Pi Sigma Alpha National Political Science Honor Society, was a natural fit.

The forum included panel discussions with over 19 research presenters and faculty from universities around the globe.  Dr. Ayubi was also able to reconnect with faculty she met in 2010, when she presented her research Iran and Nuclear Terrorismat the Oxford Round Table Forum on Public Policy.

In the fall, Dr. Ayubi and Honsinger received the exciting news that their work was to be published in the online journalForum on Public Policy.

Dr. Ayubi’s next research goal is to examine the political future of Middle Eastern countries such as Libya, Iraq, and Syria.